The sculpture was commissioned through a competition entry from Renn & Thacker, I joined the project about two months into the build. I experienced design meetings and worked with clients and architects on site.

The sculpture consisted of a two metre high plinth of granite rocks with a poem etched into the rock written by Peter Finch reflecting Cardiff’s multi cultural community. On top of this plinth sits a ten metre high stainless steel lighthouse with a blue pulsating light representing the safety beacon the police provide.

My main contribution to the sculpture was to spray paint the poem etched into the granite rocks and lay the pebble formation around the edge of the plinth. 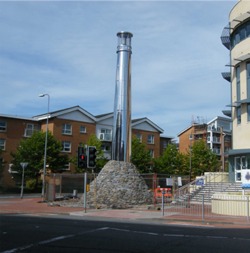 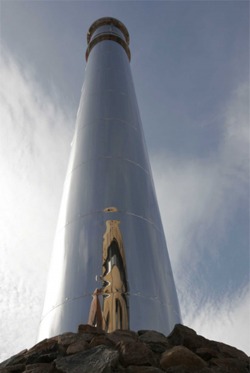 This was a concept for a mobile viewing platform designed to follow the London marathon, which adapted to walk on land and ‘swim’ on the Thames. The project took inspiration from Theo Jansen and la machines creations.

This was a challenging project; how to design the legs so that the form could walk and also swim. The answer was to make the leg system able to change its rotation pattern, one for land and one for water.

Sustainable issues were at the heart of the concept; the mechanism is driven by wind power generated through the void in the form and wind turbines mounted at the back. The viewing platform also combats air pollution, using small ionizing purifiers which cover the top of the form 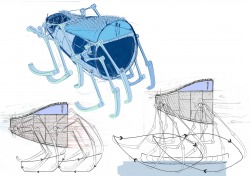 Situated on a tor in Dartmoor this weather station serves as a wind and weather research centre with room for two people to live. The form was derived from a box that rotates and expands as it moves round and up the tor. The angular lines of the structure take reference from the surrounding environment.

The concept of the expanding rotating box was to take the user up and around to the inaccessible side of the tor allowing for inspiring views across Dartmoor. Also the box forms serve as distinct zoning areas of working and living spaces, with the spiral stair case acting as a threshold from one to the other. 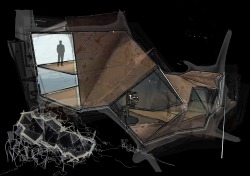