This project began as an attempt to redesign the garden space outside the Faculty of Science situated on University grounds. I proposed that the garden space would operate as a breeding ground for micro-organism’s and experiments in innovative micro biological advancements towards issues concerning health and sustainability.

I presented my ideas to a panel of professionals who were involved with the garden space, they liked my ideas and concepts and asked me to further improve on two particular aspects of my design, namely the algal tower and the bacteria viewing frame.

I have worked alongside scientists and engineers to develop my ideas and concepts on these particular installations to fully understand both the organisms that will be present within the features and the structures needed to make this possible.

The design looks towards improving people’s perceptions of both algae and bacteria and to show the beauty of these micro-organisms which many of us regard as ugly and unclean. The two installations will function as live experiments within the space; the algal tower consists of a splaying upward spiral tubing which is where the algae will be housed, the algae present within the tubes can be changed and studied as it flourishes within the tubing creating a mixture of beautiful green hues of which will change with the seasons and atmospheric qualities of the space. The bacteria viewing frame works as a large petri dish were bacteria from the space can enter the container and grow creating complex ecologies of bacterium present within the space. This is displayed within an engineered frame for visitors to appreciate the complex aesthetics of these simple and diverse air borne bacterium.

The project is now entering its final stages and will soon be completed so more pictures and developmental concepts to come! 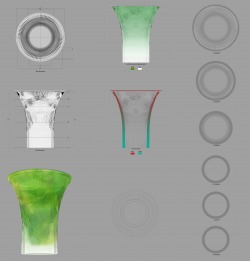 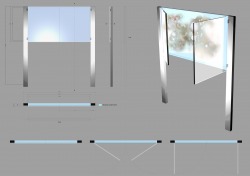